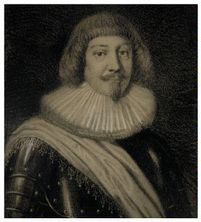 Walter inherited the Buccleuch Lordship on his father’s death in 1611. The Border of his father had gone, with a joint Kingdom there was no space for the reiver and no more March Wardens. Walter would have a domestic life of estate management and marriage. After the birth of his son and heir, Francis, Walter’s thoughts went towards bringing some excitement and danger into his life. Like his father, he had a restless spirit, and decided to follow in his footsteps with an expedition onto the continent – and to take part in the “Eighty Years War” had done from 1604-1609.

The “Eighty Years’ War” or Dutch War of Independence ran from 1568 to 1648. The war began as a revolt of the Seventeen Provinces against the political and religious hegemony of Philip II of Spain, over the sovereignty of the Habsburg Netherlands. The war concluded in 1648 with the Peace of Münster, when the Dutch Republic was recognised as an independent country. The war was in two halves fought between 1566 and 1609, when the Twelve Years’ Truce was signed in 1609, with the northern Netherlands had achieved de facto independence. The second phase was fought from 1619 to1648.

In 1627 Walter raised one hundred volunteers and sailed for Holland after executing a commission to look after his affairs in case he did not return. On landing, he joined forces with Prince Frederick Henry, and served his multi-national army as mercenaries.

Buccleuch was present when Frederick Henry besieged the town of Groenlo (Grol) in 1627, the main action of that year. The siege began on 20 July, 14,000 foot and 4,000 cavalry (with French, Scots, English, High-German, Frisian mercenaries) – encircling the town. Grol contained a Spanish garrison of 1,200 men under Matthijs Dulken. 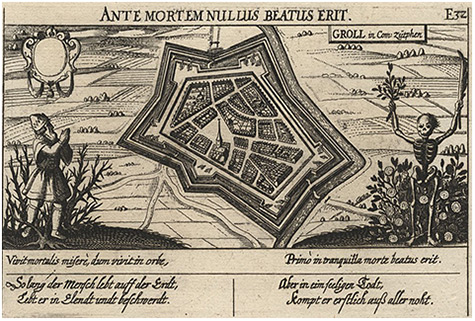 A 16 km long circumvallation trench was made around the town in order to prevent the enemy from leaving and to stop any liberation from outside. And from which guns were set up to fire on the town. During the siege 200 incendiary “fireballs” were shot into the city, causing heavy damage to buildings and people. Dulken himself was wounded in the shoulder by a musket bullet and handed over command to Verreyken. 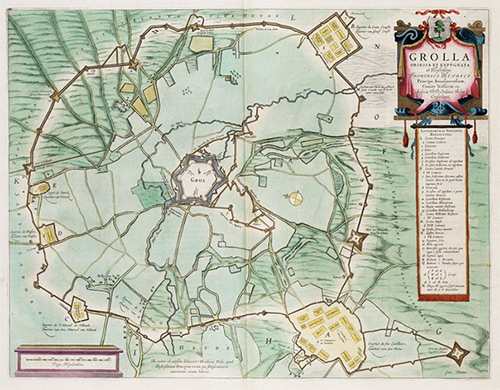 On the third week of the siege, a Spanish army of 16,000 men and 5,000 cavalry (with German & Italian mercenaries) under Hendrik Van den Bergh) turned up to relieve Grol. The Dutch were outnumbered but fortunately were well entrenched – with the Spanish unsure on how to progress.

The Spanish army fired their guns for the Grol inhabitants to hear that help had come, but frustratingly could do little else. Quarrels occurred between Spanish and Italian troops on the best plan of action, whether to cut the Dutch armies supply lines or to do a direct attack. An attempt to break through to Grol was eventually agreed upon.

The attack when it came surged towards a rampart which was held by the Scots, and seemed to succeed at first. A fierce counterattack led by Officer Morre was undertaken, that drove the Spaniards away, erasing all hope for a victory for Van den Bergh.

As the relieving army withdrew, the Dutch took the opportunity to negotiate for a surrender, which was refused. A few days later an English unit blew a mine and got inside the outer defences. They were all slain, but the breach in the wall was enough to convince the Spanish that the town could not be held, and on 19 Aug they surrendered. 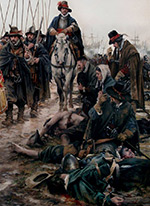 The Earl of Buccleuch acquired a great reputation in the service of the States of Holland against the Spaniards by the following year. Walter is referred to as a colonel in 1628, which implies he now commanded a regiment. 1628 was a year with little land campaigning. The Earl returned home with a resolve to return in the spring of 1629.

Buccleuch was back in Holland later in 1629, were he is noted as taking part in the siege of ‘S-Hertogenbosch.

Buccleuch was back in Scotland in the summer of 1630. Life returned to domestic affairs, with the birth of his 6th and final child Lady Mary Scott, named after her mother. She was born at Newark castle on the 11th of April 1631, in Yarrow where the Earl and Countess were currently residing. The Countess did not survive the birth many days; sadly birth complications occurred and she was dead and buried within a fort-night.

Perhaps due to his wife’s death, Buccleuch was off to Holland again on his third visit, departing in the late spring/summer of 1631. He was recorded as being present at an operation near Bergen-op-Zoom. Buccleuch’s third visit to Holland was cut short by a request from Charles I to have him return from his command at the start of 1632. Charles desired his presence in London, as his Majesty had occasion for his services.

1632 was an important year for the Dutch Republic. Frederick Henry was determined to deliver his death blow on the Spanish hold on the Southern Netherlands. Buccleuch went back to Holland for the fourth time later that year and was at the siege of Maastricht, fought June 9 to August 22, 1632. He returned to Scotland in the autumn of 1632, and living at Branxholm.

He then returned to his command in the Low Countries for the fifth & last time, in early 1633. The last record of Buccleuch alive comes on 4 October 1633, six weeks before his death, when still in active service overseas – when he wrote a letter to his sister, Margaret Scott, Lady Ross. He died in London on 20th November 1633.

SWORDS FOR HIRE - SCOTS IN SERVICE OF THE DUTCH

Already by 1580 the Scots’ growing reputation in the Dutch Republic led the English Privy Council to specifically remind their ambassador, Robert Bowes, that ‘the Scottish nation is this day stronger in feats of arms than it was aforetime by reason of their exercise in civil wars and their being in the Low Countries’. The emphasis on siege warfare and garrison service allowed many Scots to gain insights into military techniques they simply could not get in Scotland, and Dutch service certainly did function as a ‘nursery of arms’ for aspiring professional soldiers. Moreover, the form of warfare for which the Dutch were famed was not only learned but also mastered by Scots the like of Francis de Traytorrens, who was noted for his work variously at Gröningen and on the fortress of Willemstad in the Dutch Republic.

It was here that willing Scots could be transformed from individualistic warriors into seasoned professional soldiers. Thereafter the numbers of Scots in Dutch service settled at a notional force of 3,000 Scots, divided into three regiments, which became collectively called the Scots Brigade. The context of the Scots in foreign service in general, and Dutch service in particular, reveals an interesting military policy set in place by the Jacobean regency governments and cultivated latterly by James VI himself. James was explicit in 1594 that he had the right to recall troops from the Scots Brigade should that prove expedient. The soldiers may have earned their pay in foreign service, but their loyalty was ultimately to their ‘Dread Sovereign’ who saw it as his right to prioritize their deployment when required.

Below you can see examples of coins from this period, on the right a "Rijksdaalder" (Reichstaler) from Gelderland / NL. These Reichstaler were also in Groenlo / Grolle from the 16th to the 17th century in circulation. In the middle is a Scottish "Merk". The Merk was used between the 17th and 19th centuries. It was originally rated at 13. 4d. (exactly 2/3-pound bulkheads or about one English shilling). The coin on the left is the Waldecker "Reichstaler" from the year 1625. 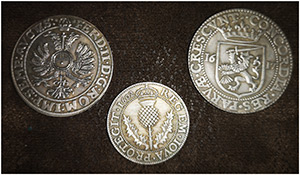 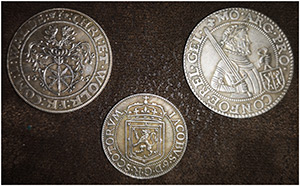